An obsessive search for good danger: Interview with Guillaume Nicloux

Read an interview with the man who’s most recently directed Houellebecq and Depardieu, all at once, gasp.

You play with the identities of Houellebecq and Depardieu. They are fictional characters: celebrities identified by the general public and beings with their own stories. Is it your intention: to play with these identities and say something specific through the stratagem you have set up?

In retrospect, I see that my films, since THE NUN, follow a recurring theme that tends toward an exploration of the intimate, where existential confusion and the quest for identity are a constant. But what makes this project so special is that it rests entirely on the trust Michel Houellebecq and Gérard Depardieu have in me. Without them, THALASSO cannot exist, unlike most films where the actors are interchangeable. In this case, the film is only possible with their consent.

Are you trying to wreak havoc with their public image?

They don’t need anyone for that. But there is a disturbing permeability between what the public knows, what it believes and what it imagines. Houellebecq and Depardieu are at the
same time both real people and media characters, fantasized about. I sometimes get lost between what I think I know about them and what they represent. 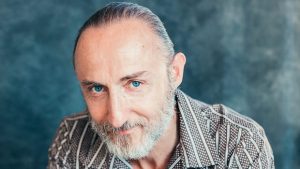 This constant slippage between “true” and “false” is wonderful terrain to explore. It’s a strange journey to what they are perhaps elsewhere, in an unknown sphere.

You place these characters in an environment – a health spa – that resembles a laboratory, in which you integrate yourself as well. Then you create events, as if trying to see what will arise from this ferment. Is THALASSO also a human experiment?

I hope this is the case for each of my films. The hope that the human will prevail over the tool. There is an obsessive search for “good danger”.

What is “good danger”?

It’s to live an experience where each gives him or herself to the other without knowing exactly what is going to happen – with a desire to shun comfort and accept constraint as source of creation. This may seems contradictory and inconsistent but nevertheless it’s the cornerstone of a project like this.

In the simultaneously comic and fantastic world of THALASSO you seem to want to merge two seams of your cinema, the comic vein of THE KIDNAPPING OF MICHEL HOUELLEBECQ and the more emotional vein of VALLEY OF LOVE…

I often tend toward this double treatment: pursuing themes explored in my previous films – bereavement and the quest for identity – but by reshuffling the cards of the genre. Here it
takes a more comical form, by twisting tragic events to give them a sometimes grotesque quality. But the additional element to THE KIDNAPPING… since there is obvious kinship, is the supernatural and the mystical dimension.

What do Michel Houellebecq and Gérard Depardieu represent to you?

They are perhaps the most mediatized people whose public utterances have been the most free – most provocative, most subversive, least restrained. It seems to me that there is a
correspondence between what is emerging nowadays: the will to liberate the means of communication from all shackles, the assertion of outrageous transparency and what these two men have henceforth imposed on themselves. Quasi-silence. Outside the private sphere, I wish them to continue to talk to me through cinema. I need to hear them and to film them.
Some of the characters from THE KIDNAPPING OF MICHEL HOUELLEBECQ reappear here.

Do you have particular attachment to your characters that pushes you to put them back on screen?

Several individuals/roles have continued their lives in my films. Because in reality, actors don’t interest me so much; it’s personalities that fascinate me. The same goes for the sets. In
THE KEY, Guillaume Canet and Vanessa Paradis are abducted by the same people who kidnap Michel Houellebecq seven years later, and sequestered in the same house, the house
on THE END, which is none other than that belonging to Dédé and Ginette, the protagonists of THE KIDNAPPING… and THALASSO.

The ending of THALASSO is an enigma…

The characters are prisoners of this room. They are facing certain violent death but vanish as if by magic. And the theme of disappearance returns. One could imagine they have disappeared into the suitcases. But perhaps they’re not suitcases. Perhaps they are tombs, or Pandora’s boxes, that will reopen one day.