Listen to the tremendous debut demo (single, maybe?) “Pass Away” from Scottish (part-Geordie) indie rock ensemble The Frowns….! They also have a new DIY video to accompany the track.

As mentioned, the band themselves originate from both Glasgow and Newcastle. After some growing pains, they now comprise Ronan on drums, Louis on bass, and Lloyd on guitar and vocals. In their own words, the “group attempts to take inspiration from several great bands including, The Strokes, The Smiths and The Doors. In terms of lyrics, the writer’s Glasgow upbringing heavily influences the songs and focuses somewhat on the love-hate relationship he has with the city. Ultimately, the band has something to say. They are on a mission to make good music for good people in the process.” 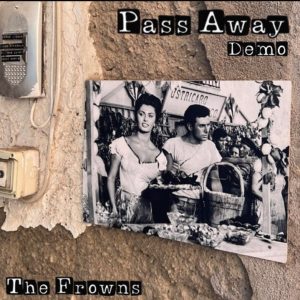 “Pass Away” – The Frowns

Please join me in catching the band live in Glasgow’s Audio on October 20th where they’ll be supporting Sovereigns.

Can ye dig it?

Tony Manero: “Ah knew that you could…”

And hear their newest tunes on their Spotify channel.