Sabrina Nichols: “If you want to stay creative you have to spend a lot of time playing.”

Sabrina Nichols is a New York-based visual artist specialising in extremely beautiful, dreamy, peculiar, and almost child-like artwork covering animation and various other types of visual art. She recently teamed up with Radiohead’s ‘artist in residence’, Stanley Donwood (friend of Felten Ink), to create video content for Thom Yorke’s side project with The Smile. The band itself, lest you be late to this particular party, is made up of Yorke, Radiohead guitarist Johnny Greenwood, and Sons of Kemet drummer,  Tom Skinner. Previously, Nichols has also directed and animated music video content for the likes of The Fall and Car Seat Headrest.

Her work with The Smile is the most brilliant yet, and here, the very modest Ms. Nichols was courteous enough to chat to yours truly about her recent work, the key tools of her trade, and the reasons behind her instinct to ‘create things’.

Can you tell me about your relationship with Stan Donwood and how you came to begin collaborating with each other and then become involved with The Smile?

Besides exchanging a few emails, I am mostly just a fan of Stan Donwood’s work and The Smile’s music. We were connected through The Smile’s label, XL Recordings, who are part of Beggars, the label group that I work at. Gabe Spierer helped connect us all. I tend to make animations in a loose, painterly style with a lot of color, and it worked with the art that Stan created for The Smile’s album release, so it made sense for me to try out some animations with it. I’m glad they liked it and let me make more and more.

What kind of brief do you get for a job like that – I’m not a designer or animator but I would imagine there’s a greater element of freedom?

I always appreciate as much creative freedom as I can get when working with someone else. For The Smile project, I was given a bunch of scanned artwork and a few written animation ideas from Stan [Donwood], and was free to create visuals from there, with a couple of notes from Stan and Thom [Yorke] was all. I do make better work with music that I can connect to, and I’ll always let the song guide the timing of the movements of the visual.

What’s the most important thing you’ve learned from other artists or animators/ illustrators you admire?

If you want to stay creative you have to spend a lot of time playing, whether it’s with art-making tools or just messing around doing whatever. Also, I’ve learned that making an animation takes a really long time….

I love your work on The Fall’s Frenz video – and the band obviously. Did you ever get the chance to see them live?

Unfortunately, I never had the chance to see them live. A lot of the time I do get to work with bands I love which is very lucky, and if I don’t know them but like the song, I will grow to love them then. I’ll have to listen to the song hundreds of times while creating a video for it, and I learn every part of how it goes.

How long have you been illustrating/ making animated art and what set you off and running in the first place?

I’ve been drawing things since I can remember, and always took a liking to make things when I was bored. Through high school and college, there were a lot more doodles in my notebooks than anything else. There was actually a scary amount of doodling, and then it became repetitive, the same things over and over. It wasn’t until I found out about drawing tablets and animation software in college that this habit became productive, and it lent itself well to animating.

I’m guessing you started sketching at a young age.. which brings me to the ‘doodles’ on your Instagram which I love.

There was not really a moment, just a lot of practicing and wanting to get better, and over time I had a lot of artwork done. Some might be [down to] talent, but I also just draw and animate a lot. Yes… there are some of my favorite notebook doodles from college up on my Instagram. I created that account at first to privately keep track of my drawings and see how they progressed. It’s kind of funny to scroll through to the beginning and see the changes and improvements. I am glad people can look at the dumb drawings I post and enjoy them. 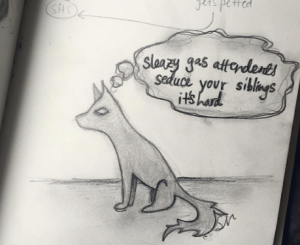 I was an intern there for a few months working with a bunch of funny and creative people. I worked on the shows that Max Simonet and Dave Bonawits made, such as Bloodfeast, Tender Touches, Fishcenter Live, and Gemusetto Machu Picchu; making small animations, doing voiceovers, and helping out with things. At one point I bought the show Bloodfeast from Max and Dave, and turned it into the Shit Bitch show, where I was the Shit Bitch, a name coined by my fellow intern at the time, Christina Loranger. The show was mostly ‘a bit’ but it failed horribly; it was full of technical issues and had no plot or crossword puzzle, and only lasted one episode. Nonetheless, I’d love to work with Adult Swim some more on other things.

I understand you’re based in New York. What’s it like to live in a city like that for you and working in your profession?

I lived in Rochester, NY for most of my life, and I moved to Brooklyn a couple of years ago to work at Beggars. Before that I was only freelancing from Rochester. The city is pretty busy, full of things to look at everywhere. It is impressive and also smells bad. I am still figuring out if I like it here but for now it is pretty fun. It is nice living here because I can often meet people from various labels or bands who commission videos from me, but mostly animating is solitary work and I am alone at a computer anyway, so I could probably be anywhere.

Where has been the biggest effect on your life as a creative? What experience thus far has been the most beneficial? Money usually brings with it other issues.

Yes, but just because introducing money brings in deadlines and input from others. Sometimes having both of those are very helpful, but also sometimes you can’t bring a piece to where you want it to be because of time restraints and the purpose of the art. I’ve been lucky enough though to work with a lot of very talented musicians and artists, and understanding people in general, and normally welcome their thoughts and feedback. 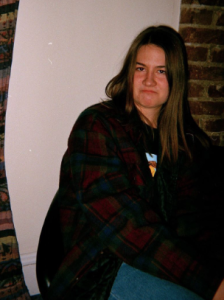 What are you most proud of and why, in your career or otherwise?

I’m very proud to work at Beggars Group with a lot of people and artists I admire, I am also proud of the work I did a while at Adult Swim. I’m proud of projects I work on with my friends, especially music projects, where I can create and perform music with the people I’m closest to. I’m proud of the 1st animated short I ever made, called “Beware of Florida’s Wildlife”. Finishing that video somehow led me to be able to finish any video.

Do you prefer illustration or animation more and what tools do you use mostly to create?

The two go hand in glove. If time allows for animation I like to animate. But animation can take a brain-crushing amount of time. I like the Adobe creative suite, and hop between After Effects, Premiere and Photoshop mostly. I like a computer that can run as fast as my mind. I like to draw in a sketchbook and use the nice scanner at work to scan drawings in.

What are your hopes for your future?

I want to make something that I love every second of it. I am not sure I’ll ever be completely happy with something I make, I will keep trying forever though. I am excited for the future… there are many people who I’d be thrilled to work with. I am working on a couple of videos for my music project called “shep treasure” and I think the videos are looking ok so far.