Sympathy for the devil

It’s important to start this piece with a major spoiler. The new Joker ‘origin’ film is a flawed cinematic and cultural masterpiece.

It’s also important to point out that comic book fans should stand at ease. This may be the tale of how their favourite Batman villain came to be, but the lineage of this is rooted within the backstreets of things like Taxi Driver and Mean Streets, even Bad Lieutenant, as well as Gotham. In other words, its a comic book film for those who love the work of Martin Scorsese via Abel Ferrara.

Joaquin Phoenix is Arthur Fleck, a middle aged, often bullied, perhaps misunderstood but always abused professional clown who lives with his mother. They both stay home most nights to obsess over a TV talk show hosted by what appears to be an older Rupert Pupkin (as seen in King of Comedy), but known here as as Murray Franklin, and again played by Robert DeNiro.

Fleck goes through life as a pained and tortured observer who will ask how the outside world has gone beyond mad. He has an underlying mental illness which is shown no remorse by a Government system no longer available to help him, and his odd jobs as a clown for hire eventually end just as badly.

The story is old but it goes on; the tears of a smiling defenceless clown are there to be picked upon but the genius of Phoenix translates this situation beyond any sort of cliche that we’ve seen many times before. Most viewers should feel pity, or sympathy, and certainly in my case, do join him in his rage 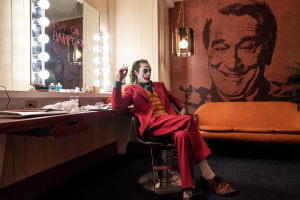 against a society which is constantly unforgiving and usually violent. And there lies the majesty in the performance of our lead actor. You cannot take your eyes off him, or your emotions.

Especially when he’s slow dancing after his first kill, or simply just moving to the sound of Sinatra and ‘Thats Life’ in front of a bathroom mirror, which, like the uncontrollable manic giggles, takes us through the transformation of our ‘hero’ in his decent, or maybe rise, towards hell in the real world and the devil he would eventually become.

His random bursts of laughter at moments of stress, otherwise known as Pseudobulbar affect (PBA), add to our hero beyond anything a previous Joker like Jack Nicholson or even Heath Ledger could even aspire to achieve. When Fleck decides to actually pursue his stand up career and appears on stage, his transformation from pitiful loser to a real danger are right there on screen – the world doesn’t understand where he’s coming from and he then truly gets it.

Nietzsche once wrote that looking into the abyss could result in the abyss looking back into the individual. In the sympathy felt for Arthur Fleck,  the viewer is faced with a dilemma – in how long we’ll be on his side, and even some may continue to root for him as he becomes the nihilistic  Joker.

The so called populist movement which gave the world Donald Trump and others of that ilk can be seen how Joker essentially hijacks a people’s campaign of uprising against the powers that be and their negligence towards the city of Gotham. Some will continue to ‘root’ and support the monster despite the abhorrent actions, as I probably did. 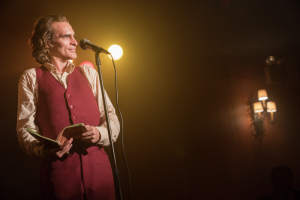 Joker is a mainstream film for a huge audience, which is bizarre given it’s levels of subversion. At its core we’re asked to look at ourselves and to follow a flawed character who develops into a demon. Whether you hate or simply dislike what the end character becomes, its an undeniable assault on modern values and modern cinema. And it would not work if it didn’t have the greatest actor of modern times in the lead role.

For all the (excuse my Pacino) media ‘Hoo-ha’ over the movie’s intentions or consequences, of which most are laughable, the really shocking thing is knowing that such content was made by Todd Philips. Let it be said that Joker is a million miles away from things like The Hangover Trilogy or Road Trip.

Its no shock to find Joker’s most classic scene arrives with Phoenix dancing to a tune by celebrity paedophile Gary Glitter. Its one in many poor jokes and exercises in taste which the characher himself would no doubt consider subjective humour. Joker an exercise in iconography and is immediately iconic.