“It comes as I am” – Pete MacLeod on Nirvana’s Nevermind

Nirvana’s Nevermind had a 25th anniversary back in 2016, so right now, that would make it just over 28. But when did big milestones ever matter when it came to mulling over cultural phenomenons, rhetorically speaking. That goes for both Nirvana and their masterpiece.

Pete MacLeod is a Glasgow based musician who’s music can be dated back to this ground breaking album, which many, including I, would label an underground work of art thrust upon the mainstream, whether you fucking love it or prefer something lighter. Pete found it when he was just a boy, and was happy to speak to yours truly about his own personal connection to Nirvana and that record, what it’s like to meet one of it’s makers, as well as how it’s shaped him as a singer songwriter. 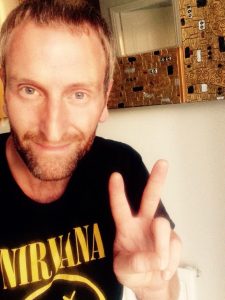 Pete, tell me about your relationship with Nirvana and where it began.

I just became a teenager when I first heard or seen Nirvana. 13 years young. 1991. I don’t think you could be a better age for a band like that to break out, y’know? I think that was the appeal of Nirvana and the album ‘Nevermind’ to many kids at my age. That’s how I feel looking back on that time now anyway. I remember watching the video for ‘Smells Like Teen Spirit’ back then and it just switched a light on for me. Probably the 2nd most inspirational music video I seen as a kid. The first being John Lennon’s ‘Imagine’, which was the first music video I have memory of watching as a kid, with both my parents on the couch. It’s a lovely innocent memory. But the ‘Teen Spirit’ video and Kurt Cobain screaming at me on TV appealed to me in a totally different way! Also as I mentioned the timing with me being a teenager was probably perfect for me to see and hear such an energy and release from someone on TV. Hearing it through the radio also and of course then I added to my personal music collection, which was growing every day, due to influences in my family, from both my parents, sisters and friends.

Your first album you bought was indeed Nevermind. Tell me about the process where you go obtain an album like that? – it wasn’t till about 1998 when I heard ‘Teen Spirit’ for the first time. I recall writing the name of the song and band on paper and leaving it for my mum to go buy it for me in the city. I bought Nevermind on my own about 6 months later and was a moody little headbanger from then for about 8 years later.

Haha. That’s funny. As I mentioned it was really also on the strength of the song ‘Teen Spirit’ and the energy of it. It probably proves [as much] that it spoke and of course still speaks to many kids. There was a guy my friends and I knew who sold the real CD’s on the cheap. Half price and not copies, like [coming] out the shops only without the heavy price. Frankie, his name was. That’s how I bought my first ever album on CD. And it was Nirvana’s Nevermind. Watching the teen spirit video and listening to that album made me pick the guitar up and instantly write my own songs and music. That’s how it went for me.

Were you into their first album ‘Bleach’ or later records like ‘Unplugged’ or ‘In Utero?

I’ve got them all – and at the time when they were doing so. They’re all very different. Kurt was an artist. They were a great band.

Were you ever into that genre of music or were that band just a ‘one off’ exploration into heavier types of music?

I tried to get into other bands who were associated with Nirvana at that time but they didn’t quite appeal in the same way. They didn’t speak to me in the same way. Although some were good of course. But they didn’t have the same connection for me, I suppose. I have good memories of the album ‘Nevermind’. I picked a winner at that age. I’ve met Dave Grohl twice when I lived in LA. And Courtney Love emailed to say to me that Kurt would have loved my cover version of ‘Lounge Act’. And the Nirvana and Foo fighters manager asked for my cover of the song to be sent to him so he could get it played on radio in the States. ‘Lounge Act’ was always a favourite track of mines. That’s why I covered it.

You met Dave Grohl, how – twice no less?

The first time I met Dave Grohl was a Sunday Morning and I was walking through Topanga Mall, when I lived in LA. I was just walking around the shops and he was walking towards me with his daughter. I said “How’s it going David?”, and he laughed and we got talking. We talked about a drummer we both knew that toured with Nirvana as support act and also a roadie that worked for them both. We ended walking back to my car and listened to some music. His daughter said: “Look Dad your friend has a baby seat in the car too”, which was my boys baby car seat in the car. It was a just down earth meet really. We spoke to each other for about half hour and he was telling me about his ‘Mom’ moving out closer to him. We spoke about a lot of stuff in such a short time. He was sound. Weeks later I was driving on my Vespa and he was walking down the street on Ventura Blvd where I lived. I pulled over and had a cigarette with him and we had another chat for a bit. It was good to meet him again. It’s funny because I probably never spoken about things I would ask him normally as a fan of Nirvana – most likely because he probably gets that everywhere he goes. Good guy.

Do you know how Courtney Love got to hear ‘Lounge Act’ and what did she actually say?  she’s generally given a bad rap by the mainstream media…

Alan McGee was my manager at the time and sent her it to listen to. And she said it was great and that Kurt would have loved my version. And she spoke about what the song was about. The media do a pretty good job of building people up and bring them down eh? I guess everyone is good at that I suppose.

What is it about Lounge Act that you loved enough to cover? I love that track also – especially the line ‘I’ll keep fighting jealousy until its fucking gone..’

I always loved the melody and it so happens to be that Youth who was recording the song with me actually got Dave Grohl to play drums on his band Killing Joke’s album too. It all made sense for me to cover the song. I made a point in recording it during my 2nd album Crestfallen sessions in Spain with Youth. I love that line too. It’s very relevant to my life and society and shit y’know?

Nirvana don’t appear to have any real influence on your sound of music of late?

I’m not sure about that though…I hear differently I suppose. I can hear Kurt in my music. In my lyrics and melodies. Perhaps the sound disguises the lyrics? I think that kind of influence will always be with me as a writer/artist.

What albums do you regard more to you and why? I’ve heard it could be ‘Revolver’….

Mmmmm….very difficult question for me to answer as so many albums mean different things to me and different times and moods. No other album other than Definitely Maybe from Oasis had such an impact on me as a teenager. That stuff never leaves you.

Tell me about your upcoming trip to Brazil, of all places – do you anticipate a culture shock?

I was asked by a Brazilian promoter if I would be interested in coming out to play in Brazil. It was pretty random but that’s the kinda things that can happen when you put yourself out there I guess. I get different emails to do different things each day. The beauty of that is I can luckily choose to do what I want really instead of having to do it because someone is telling me that I have to y’know? It’s a show at a venue in Manaus, Brazil. Culture shock? Nah, different though, yes. Which makes it all interesting. I’ve never played in South America before so it’s good to do things I haven’t done before. It’s all part of this trip I’m on.